Following on from part one of Can’s interview with Saulo, conducted during his June 2013 trip, it’s time for part two. This week, the BJJ legend talks about his immensely popular book, Jiu Jitsu University, widely seen as the gold standard for instructional BJJ volumes. He also shares his thoughts on teaching, drawing on his vast experience of running a class.

This interview originally appeared in Jiu Jitsu Style Magazine #17, so is being republished on the Artemis BJJ site with the JJS editor’s kind permission. Along with the two parts on ArtemisBJJ.com, the third part is still up on the JJS website, here.

ARTEMIS BJJ: Kevin Howell said that discussing the “if you think” principle with you led directly to writing your book, Jiu Jitsu University. It is widely regarded as the best instructional book out there: why do you think your book has been so successful?

Everybody asks me, “Saulo, why don’t you do another book?” I say, because I don’t want a comparison with my first child. Let me have another version with another identity, where I can reach way more people. That is BJJ Library. That’s why the book now, I have already pretty much all written, the second one. But the second one is about mental toughness. It’s different. In this new generation of YouTube, all these jiu jitsu practitioners, they are getting very empty inside, about all the things that motivate the machine to work. About self confidence, discipline, respect, honour, attitude, family, principles, about everything!

That’s the core of martial arts. And you want to sell all this nonsense before you start to really touch the human being? That’s a tragedy. What kind of society is this? It’s not American jiu jitsu. It’s Brazilian jiu jitsu, with the culture and the principles and everything. It’s like when I go to the Kodokan, I’m not learning Brazilian judo over there. I’m learning the traditional judo from Kodokan. That’s what I’m going there to do.

That’s why here at the University, everybody has to count to ten in Portuguese. They have to know the eight basic takedowns, because every single person in the world training jiu jitsu has to know how to fight standing. These are several things that you must know. There are a lot of things to be brought back.

I’m glad that we have a reputation for this and we still can improve, still can provide the real traditional Brazilian jiu jitsu. That’s why we’re here in the States. We didn’t move here to adapt. We moved here to set a culture of Brazilian jiu jitsu. That’s what it is all about. We’re not going to bend to any gi company that wants to put a yellow gi, a brown gi. A pink gi? This is not traditional jiu jitsu. Here, we have white and blue: it’s tradition.

That’s what we’re doing with jiu jitsu nowadays, and I think that BJJ Library is going to help us a lot to be the voice. And guys like you, that work and have the vision that we have. We are not here to try and convince anybody or anything. We are here as an option. When I wrote my book, the guy gave me twenty books to study. You know what I did? “Take this out!” I don’t want ideas from somebody else, I don’t want to see the opinions of this guy. I’m not this guy. They haven’t done what I’ve done in my life, they don’t have my history. We are different.

ARTEMIS BJJ: There is a very clear structure in Jiu Jitsu University, moving from survival through to escapes, the guard, passing and finally submissions. Presuming this is a structure you also use in your teaching, is it difficult to encourage that mentality for each belt?

SAULO: It is very difficult if they are not my students from day one. It’s like having your ex-boyfriend still on your mind, or ex-girlfriend. Their behaviour with you today is going to have the remains of what passed between them and that other person in the past. So we’ve got to clean the whole thing. That’s why we used to say – when they would come as a blue belt, a purple belt, from a different school – “Are you ready to let go of everything that you had until now, in order to accept this?” You might not get it now, but you’re going to get it very soon. Then you see that they have already developed certain instincts, reactions, that has nothing to do with what we preach. Then they have to re-adapt everything.

But if this starts from white belt, it’s pretty easy, because from day one, they see the mentality working. “Wow, I already don’t let this guy mount on me, because my elbow and knee are connected? That’s incredible!” Why? Because when you put somebody on your back, the first reaction is like they are babies again. So when they start to develop this, they are like, “Wow! This by itself is already totally new for my body reaction.” They are already on the journey, they already believe in you.

It’s like when you get a puppy and a big dog. To be a big dog, it will take a while. 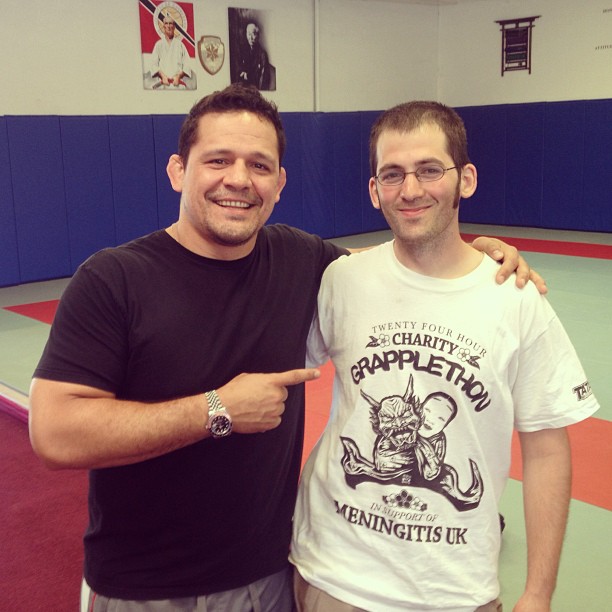 ARTEMIS BJJ: You have a lot of experience as an instructor: what are your thoughts on developing a solid teaching methodology?

SAULO: The best way to teach is be yourself. Don’t teach what you don’t know, don’t try to impress all your students or anybody else. Be confident in what you’re showing, respect everyone and every question that comes your way. They are not a threat, they are maybe just a misunderstanding. You’ve got to really take it to the best of your ability, because that’s the only way you’re going to give your best. If you are giving your best and you really love jiu jitsu and believe it, there is no wrong. Period. There is no wrong.

Everything that we discuss below that, is just bar talk, is just “do you like black or yellow?” It doesn’t matter. But the main, the core of the thing, is what it is. Don’t come to America, put an assistant to teach your class and expect all your students to love you. They won’t. They’ll leave. They want you, they want the truth, what you have to show them. You came to America and you don’t like to teach? So what are you doing here? What kind of business are you doing? You can’t lie in jiu jitsu, you can’t lie.

You have to be honest, because your student may be a white belt in jiu jitsu, but they might have a lot of skills that you don’t. They are watching you. That’s why I say when we put on the gi, we are the same. What makes us different is the heart, your experience and your skills. Everything I need for my life, I have from jiu jitsu. Lawyers, doctors, real estate, mothers, cooks, DJs. All the specialists are here, it’s your army. The people that you go to the next level with.

If you don’t teach, that’s a problem. It’s not about the methodology, teaching jiu jitsu is like teaching your fingerprint. Everybody has a different one. You can choose a book, or maybe a system, like Gracie University. Or you can choose an instructor. That’s your truth of jiu jitsu and you’ve got to have no doubt.

If you have doubt, it’s better you shop around. That’s ok, that’s ok to shop around if you’re not that attached, if you feel like you belong to somewhere else. That’s completely fine. It hurts, but that’s the way it should be, because before you can be loyal to somebody, to a sensei, you’ve got to be loyal to yourself. Do I really believe that I should stay here? If you can say ‘yes’, good. If you have any ‘no’, go see what’s up, because you’re not 100%.

It’s a whole different thing. What was our first marketing in America? Teach the best American jiu jitsu guy how to be a world champion. That’s our marketing. I came to your country and I’m going to make an American a world champion, just to pay my dues to America.

So, we make Rafael Lovato, went back to Brazil and won. In Brazil! That was a wake up call for all the Brazilians. Hey, fighting in Brazil is important to influence this new generation of fighters. Don’t just come to America and fight for money. Fight for your country. Now, for all you guys, who has the crown in Brazil? An American guy.

That’s our silent way to make a statement, you know? Oh, we come to America. Thank you, thank you America. But let me do what I do best. Teach somebody to kick everybody’s ass.