The earliest extended interaction Can ever had with Chrissy was when she wrote some articles for slideyfoot.com about the women’s class she was running. It was therefore a question Can was keen to ask in 2014 upon finally meeting her in person, especially as this was when he was still planning the Artemis BJJ women’s class.

So, in this last section of a five part interview (which is transcribed from this audio”, Chrissy and Brian Linzy talk about women’s classes and teaching, before wrapping up. They talk about their start in BJJ in the first part of the series here, the second section focuses on US Grappling here, while the third and fourth parts (going into yet more detail about US Grappling) can be found on the Martial Arts Illustrated website, here. 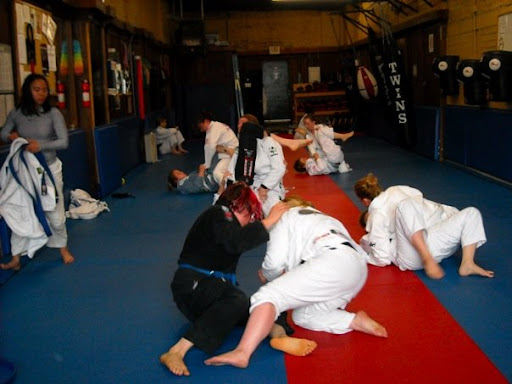 CAN: Ok, moving on to a topic close to my heart. What’s your view regarding women’s classes?

CHRISSY LINZY: After being in jiu jitsu so long, I have kind of a different opinion about women-only classes. I think they can lead to women segregating themselves and it hurts our jiu jitsu. If you’d asked me five years ago, I would have had a completely different answer and said it was absolutely imperative. I think it’s great what Val is doing with the camps and it’s great to let women come together, but when women come together just so they can talk about how mean boys are, it’s not helpful.

Now Groundswell is moving to co-ed camps as well, which I think is fantastic. I think that is going to be huge for jiu jitsu, in just letting men see “Oh, women can teach jiu jitsu?” I think there are a lot of men that need to see that. I mean, you’ve rolled with Val, she’s kind of good at jiu jitsu. [laughs]

BRIAN LINZY: After the women’s camp, in I think Chicago three or four years ago, there was a picture of a bunch of women sitting in a line. They were doing something like the sit-ups with their legs interlaced.

But they weren’t really doing anything, they were all just laughing. It was posted on Facebook – or whatever the Facebook was at that time, maybe MySpace – and a lot of people responded to that picture saying, “Oh, this is what women’s jiu jitsu camps are about? You’re just giggling and laughing all the time?”

Over and over again as people responded in that thread, as the responses like that came in, I would be like “I feel bad for you, and for you, and you.” Everyone who said that, I was thinking, what is it like to train in your gym? Is your instructor beating you with a whip saying “No smiling! No fun! Drill!”

CHRISSY LINZY: The whole reason we do jiu jitsu is because it’s fun. You’re paying for this service! [laughs] Are you paying for people to treat you like crap and not have any fun? The little bit of free time you get in your life, you want to dedicate it to something that’s not fun? Something that doesn’t make you think and laugh, getting friends from all walks of life? That’s so strange.

I was at that camp, we were training two or three times a day every day. Emily Kwok and Felicia Oh, they are hard core. They will make you do warm-ups until you die. You’re thinking, “I’m not young, I’m 40 now.” Training twice a day for a person that has a desk job, doing two-a-days with killer warm-ups – fun warm-ups, but oh-my-god-I’m-too-old-for-this warm-ups.

Any guy who thinks that is what women’s grappling camp is about really needs to go to one of the co-ed camps. They will leave tired with better jiu jitsu.

CAN: As you know, I want to start a women’s class, removing as many barriers to entry as possible. Val had the great suggestion of doing a survey, ask them what they’re looking for, why are they training, etc.

CHRISSY LINZY: I would agree with that, ask them why they train and make your women’s class clearly a branch to co-ed classes. They have to get in that environment as quickly as possible for them to progress in jiu jitsu. 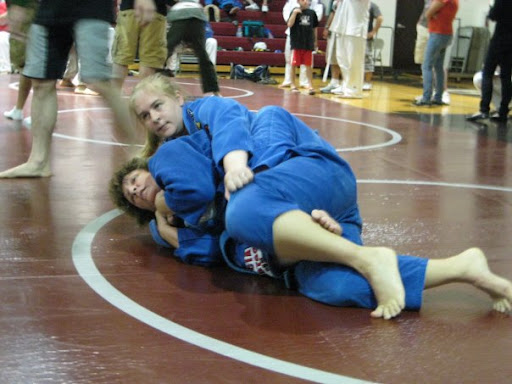 CAN: Considering you’ve run a women’s class, do you have any thoughts in terms of what to teach, format, structure, that kind of thing?

CHRISSY LINZY: I have all my notes, I’m happy to share those with you. Basically what I did was an eight week cycle. As people started to progress a little more, I could add various different things. The way I liked to teach things was if you and I are going to drill together, I don’t want you to make a mistake fifty times in a row to enable me to drill the right thing.

One of my favourites is switching from armbar to triangle. Stack and posture, so the person on top is stacking, you’re switching back and forth between triangle and armbar. I think instead of people drilling “this hand goes here, this hand goes there, put my foot on the mat, shrimp away,” you learn more of the flow of jiu jitsu, you learn the motion and the transition. I think that was really helpful.

I know it is how I like to learn, I think it’s helpful for the women who stick with jiu jitsu and come into the co-ed classes. When I would start bringing them over, shepherding them into the mixed classes, I would be their partner for the first night, or I would make them come as a pair. “It’s going to be just like this class, they’re just going to be boys. It will be fine.”

If I’m there, and the other instructors – the people who actually teach jiu jitsu – they make sure they don’t get paired with the two-stripe white belts who have something to prove, or anything like that.

CAN: Was there anything else you want to say to the readers of this interview that hasn’t been said already?

CHRISSY LINZY: Not that I can think of, other than I always tell people that jiu jitsu will always be there. If you have to take breaks, life gets in the way, you have a kid, crazy job, injured, jiu jitsu will always be there. People won’t be as hard on you when you come back as you think. They’re nice. [laughs] I’ve been out for a while and I’m going back: everybody’s nice, they know that it’s been a while. They move a little slower and give you time to figure things out. Jiu jitsu people are cool. 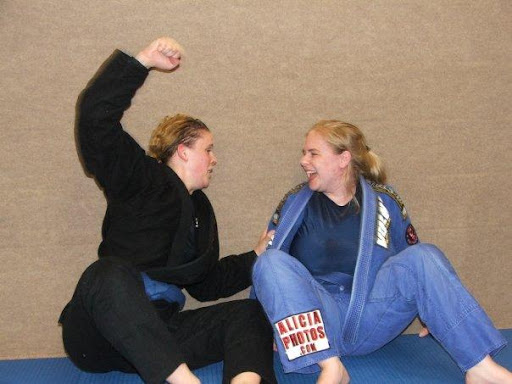 BRIAN LINZY: I have a lot of the same sentiment. I’ve always felt that because we’re not drawing our livelihood from US Grappling or jiu jitsu in any sense, the minute this isn’t fun to me, you’ll see my gis on CraigsList. But we’re nine years into jiu jitsu and seven into US Grappling, it’s still fun. I’ve taken a long time off, we moved and like everyone my size I’m injury prone. Knees aren’t meant to hold someone as big as me.

So, I end up spending a lot of time away from the gym. I trained twice this week, which brings my total for 2014 to three. If you hadn’t come I wouldn’t have trained this weekend, but now I’m kind of fired up and ready to go back. I’m sore, I hurt and that’s good. I want to get back in the gym and keep doing this until the minute it’s not fun, or the minute I stop learning. I don’t want to spend any time training self-defence, I’m not interested in that, I’m interested in the sport and learning. I’m still doing that.

I feel like if I’m learning an armbar from the guard and you tell me, “put your leg behind his arm so he can’t pull it out,” I get nothing from that. If you ask me six hours later, “why did I tell you to put your leg there?”, I don’t know, that was your instructions. But if you were to say to me, “I can pull my arm back here and you need to figure out a way to stop that,” you can ask me years later, and because I figured it out I’ll still remember it.

That experience right there makes me want to keep going back. I mean, I love reading, I love learning from books about all different subjects, but it’s that old “chess on the mats” thing. People say it too much, but I love it. To actually be able to do something with my body, from that, to be able to expand my mind from figuring out I need to trap your arm with my leg, put the pieces together. That’s why I will keep doing this until…probably until my knees give out.

Photos courtesy of Chrissy Linzy. ‘Like’ the Artemis BJJ Facebook group to be notified about future interviews: for the archive, go here